Social media went into meltdown on Thursday night after Oakland Athletics’ bench coach, Ryan Christenson, was caught on camera giving what appeared to be a Nazi salute – twice – during the A’s post-game celebrations.

What the fuck is this? Also, great to see Liam Hendriks immediately call this horrendous behavior out. pic.twitter.com/aQGIZm5pzE

The footage is pretty damning and calls for his head were instantaneous, resembling a shiver of sharks during a ferocious feeding frenzy in San Francisco Bay.

I just spoke to Ryan Christenson and he said he knew instantly what it was about when David Forst called him because when he had reached out to do the karate chop with Hendriks, Hendriks said “No, no, no straight arm!” and Christenson took a second to realize what he meant.

“Obviously I wasn’t doing that intentionally. I just blacked out, my mind wasn’t there and I spaced out. I’m sure it looks terrible. I did it but it was not intentional. I don’t know what more to say.” 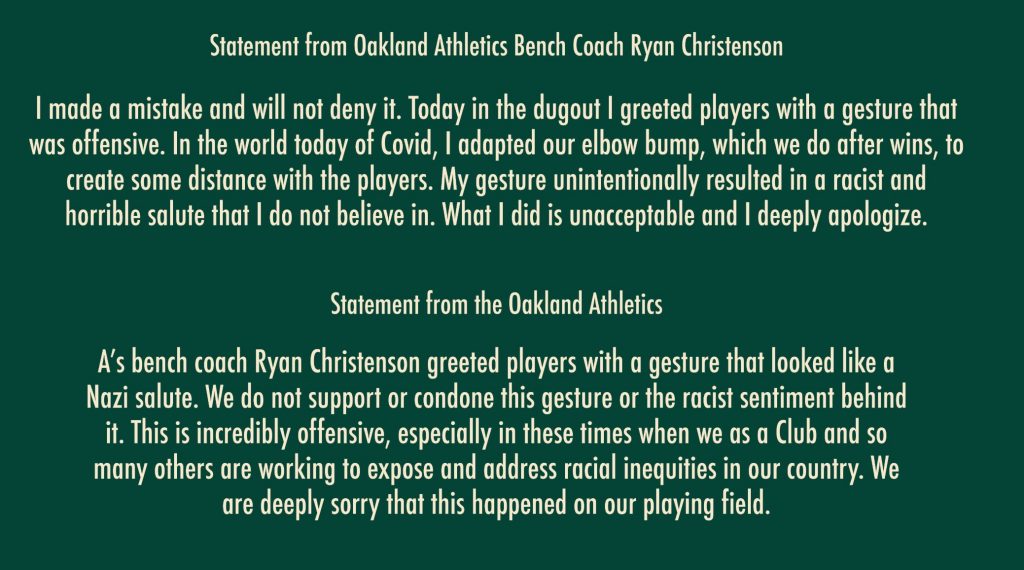 So here’s my take on the incident…

First and foremost, it was great to see Australian pitcher Liam Hendriks step in immediately and stop Christenson from continuing the salute. It’s also believed he also explained, at the time, how offensive the gesture is and looked. This type of behavior, intentional or not, needs to be called out when seen and Hendriks handled the situation perfectly.

Second, you can clearly see from the footage that Christenson laughs about the offensive gesture even after Hendriks tells him to stop doing it. To make matters worse, he does it [the gesture] a second time while continuing to laugh and joke about it. This is what bothers me the most.

Third, Christenson’s comments immediately after the game to Slusser were also concerning. To claim he “blacked out” and was “spaced out” is a cop-out and I, like many others, call bullshit. If it happened once, I could probably accept it as a genuine mistake, but he repeated the act immediately after being told by a teammate that it was inappropriate.

So where to from here?

As always, social media was absolutely divided on the issue, with opinions ranging from pure outrage to some calling it a massive overreaction.

Ryan Christenson (the Athletics’ bench coach) made an inappropriate gesture (Nazi salute). He apologized immediately after the game and claimed wholeheartedly that it was unintentional.

His discipline should be:

One thing that will work against Christenson is the ever-increasing ‘cancel culture’ seen online, driven by easily offended do-gooders who feel better about themselves when participating in the moral pile-up.

Make no mistake, I believe Christenson’s actions were offensive and, at best, careless. Intentional or not, the lack of awareness and understanding is itself worthy of discipline. The severity of it though (the discipline), needs to be considered carefully.

I certainly don’t believe he should have his employment with the Athletics terminated. I have always disliked ‘cancel culture’ and would much rather see people re-educated, re-trained, and ultimately better themselves. Everyone makes mistakes, careless or otherwise, and self-improvement is far more beneficial to all parties long term. Of course, there are exceptions for gross misconduct and I understand how some believe this is one such case.

For mine, I think Christenson needs to face the cameras tomorrow and issue a genuine apology to anyone he offended. Some cultural-awareness training also wouldn’t hurt. And finally, an example does need to be set, to ensure such events don’t occur again – from Christenson, the Athletics, or anyone else within baseball. As such, a short suspension, perhaps 5-10 games, seems pretty reasonable.