Heading into another gruelling MLB campaign back in March, fans and sportswriters alike unanimously believed that the fiercest battles for divisional supremacy would occur on the east coast, with both the American League East and National League East stacked with talent.

With less than two weeks remaining in the regular season though, fans are struggling to split a trio of hopefuls in the National League Central Division – the St Louis Cardinals, Chicago Cubs, and Milwaukee Brewers. Most of the Sports betting sites are being flooded with bets from fans seeking generous odds and a tidy late-season return.

Entering Wednesday with just 11 games to play, the 84-67 Cardinals hold a narrow two game lead over a pair of regional rivals, however face a challenging stretch ahead with a rubber game against the Max Scherzer (10-6, 2.65 ERA) and the Washington Nationals, and a challenging road trip through Chicago and Arizona. Their final three games at home against the Cubs won’t be much easier either. Having lost five of their last eight games, they will need to turn things around quickly or risk slumping out of the playoffs mix despite seemingly looking certain earlier this month.

The Cubs meanwhile have a slightly easier schedule, with a game against Tyler Mahle (2-11, 5.11 ERA) and the Cincinnati Reds and three games against the lowly Pittsburgh Pirates sandwiched between the seven against the Cardinals. They too have some form concerns of late though, having been somewhat streaky and struggling to string together consecutive series wins since mid-August. The key for the Cubs will be ensuring a powerful offense, jam-packed full of potential, can find some consistency. If they falter, it’s somewhat astonishing to think a lineup possessing Kris Bryant, Kyle Schwarber, Willson Contreras, and Nick Castellanos (among others) doesn’t feature in October.

The final team in the picture, the Brewers, are quite the opposite, having been absolutely red hot of late despite missing National League MVP candidate Christian Yelich with a season-ending knee injury. The Brew Crew have surged after appearing to have fallen out of contention late last month. During the two-week long streak they’ve won 11 of their 12 games on the back of some tremendous pitching – in the 11 wins the Brewers’ pitching staff has allowed three runs or less on eight separate occasions. Down the stretch they have the easier schedule of the three teams too, facing the San Diego Padres twice at home before hosting a three game set against the Pirates. They’ll finish with a six game road trip through Cincinnati and Colorado, ensuring all of their last 11 games are against teams well under .500.

As things currently stand, it seems the Brewers may be the team to beat. That schedule is extremely generous and should help ensure they nudge 90-91 wins. That may be enough to snatch the division title, leaving the Cardinals and Cubs battling it out for the two wildcard spots with the Nationals. 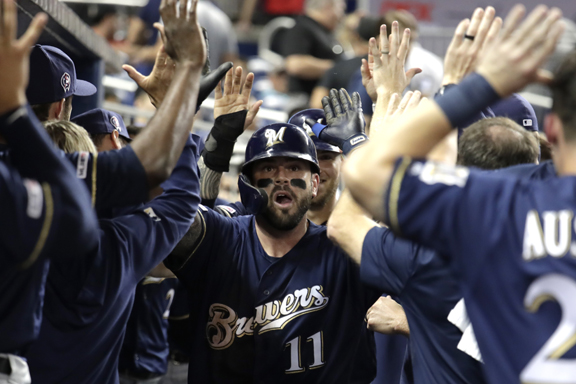